We have existed, we exist, we will exist! Our every march is a pride march! 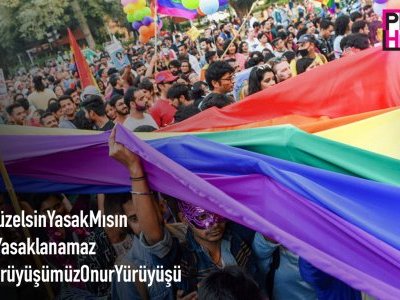 To the Press and the Public:

The Governorship of İzmir, through an announcement published on their website, has banned the 7th İzmir LGBTI+ Pride Week, which was planned to take place from June 17 to 24, on the grounds to “ensure the peace and safety of the people in the city, their right to privacy, and the safety of the economy, public security and welfare; to protect national security and public order; to prevent crimes; to protect public health and public morals, and the rights and freedoms of others; and to prevent possible violence and terror incidents.” As for the 3rd Antalya LGBTI+ Pride Week, which was to take place June 14-16, all LGBTI+ events in the city has been banned for 15 days by the decision of the Governorship of Antalya on the second day of the pride events, on the basis to “avoid dissident groups from facing each other; to prevent the disturbance of the current peaceful environment, national safety, and public order, as well as public health and morals; to block possible violence and terror incidents; to protect the unbreakable unity of the government, state, and nation, and the rights and freedoms of others.”

For these bans which were imposed in the different cities of the country, the reasons were put forward sometimes on the grounds that “[it] may overtly provoke a part of the people, who has different characteristics in terms of social class, race, religion, sect, or region, into feeling hatred and hostility against another part; therefore, [it] may cause a clear and possible danger to public safety”, as it was during the German LGBTI+ Film Days that Pembe Hayat QueerFest planned to organize on November 17, 2017; and sometimes on the grounds that “[it] may be protested by some people and may lead provocations due to some social sensitivities, towards the group and the people who will participate to the organization, considering that a clear and possible danger to public safety may occur, also it may be hazardous for public order, prevention of crimes, public health and morals, or protection of other’s rights and freedoms”, as it was the time when the LGBTI+ events were banned for an indefinite period in Ankara, which violated our rights.

Here we, LGBTI+s who declare that every march is a pride march, who are the subject of uncountable gender identities, sexual orientations, gender statements, role, and gender-neutrality, ask to all the ministers and top officials, to the governors and to the perpetrators of this unlawful act; how can an event create a danger of terrorist act and threaten general morals, general health, national security, and public order, all at the same time? On one hand, it is claimed in some cities of the country that the reason for it is to “protect LGBTI+s from possible dangers”; on the other hand, it is stated in some other cities of the country that “LGBTI+s threaten and terrorise the public safety”. Does not it show how inconsistent “the ban-makers” behave? When we look at the ban that was put to the LGBTI+ events in Ankara on November 18, 2017 for indefinite period and the ban that was imposed to the LGBTI+ events in Antalya for 15 days; was the ban in Ankara a try-on for a ban which will be imposed in the whole country? The governorships should enable the events to be organized safely, instead of overtly criminalising LGBTI+s through these bans directly related to the rights of LGBTI+s and rather than trying to indirectly stop the activities of the NGOs and associations that work for LGBTI+ rights, should not they?

We shout our rights that we want to remember and to make remembered, that are protected by the constitution and international agreements; we shout them to the perpetrators of these systematised chains of bans and chaos:

Here we speak undaunted: LGBTI + rights are human rights! We stand by all banned LGBTI + events, pride weeks and marches, and we will follow up to the end of this unlawfulness! We announce to the press and the public that we demand the “ban-makers” to act as law-maker and protectors instead of violating our, LGBTI+’s, rights, to develop non-discriminatory and inclusive policies, and to secure the rights and freedoms of LGBTI+s and we will repeat these demands of ours until each and every LGBTI+ living in our country enjoy the rights and freedoms.

Even if you try to suppress, ban or even destroy, you cannot prevent LGBTI +s from fighting for equality and freedom. We have existed, we exist, we will exist! Our every march is a pride march!