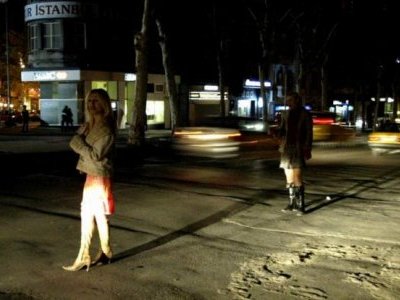 The Ulker Street of today is nothing like the one Şevval Kılıç lived on in the 1990s, though at first glance it looks similar. The trees that overtake the sidewalk stand taller than they did two decades ago, but otherwise the sleepy lane off Istanbul's central Taksim Square is lined with most of the same five-story apartment buildings that stood there before.

Who lives inside them, however, has changed a lot.

Kılıç, now a former sex worker, was 19 when she moved to Ulker Street in 1994. 'I had so much fun,' she giggles, remembering the days of her youth. 'I was young. I had [a] dick,' she explains. She had not yet completed her transition to becoming a woman when she joined the Engin Apartment brothel.

Today she stands tall with long, wispy, caramel-colored hair, perfectly shaped eyebrows and large breasts usually hidden under a T-shirt. It is a far cry from where she started on Ulker Street. 'When I arrived ' I only had boy clothes,' she says.

The house mom fed her, dressed her and showed her the ropes. Kılıç says, 'She taught me everything about working, about secrecy, about danger,' including certain rules and codes. Do not call for a customer who has already been claimed, she was warned, and watch out for cops. While licensed prostitution is legal in Turkey and state-registered brothels undergo a strict registration process, she and her peers were working off the books, since the state does not accept transitioning women or gay men into their brothels.

To keep out of trouble, the residents of Ulker Street used code words that make up a slang called Lubunca. That is how they communicated in front of police and clients, effectively speaking a secret language that outsiders could not understand. Lubunca, for many, became the language of Ulker Street.

The earliest traces of Lubunca can be found about 100 years ago, as the Ottoman Empire was waning, says Nikolas Kontovas, a sociohistoric linguist who has studied the origins of Lubunca. While there are few records of the argot back then, Lubunca was found in spaces where men engaged in sex work, such as bathhouses.

It wasn't until the late 1980s and early '90s that Lubunca became more prevalent, along with trans sex work. Eventually, the spaces where Lubunca was used expanded into unregistered brothels and their neighborhoods, where male and trans sex workers interacted with minority communities like the city's Roma and Greeks or musicians and other artistic groups. 'There is lots of Romani. A lot of the vocabulary [of Lubunca] overlaps with Romani,' Kontovas says.

He explains that the argot is deeply tied to its function. 'Unsurprisingly, a large portion of the lexicon is devoted to sex. Sex acts are one of the largest categories, if not the largest ' There's also tons of vocabulary for money,' he says, and for what he likes to call fun, like alcohol and cigarettes. Lubunca does not exist just for its own sake, he said. It exists because it's needed.

Kılıç describes the kinds of words most prevalent in daily use ' prices, sex positions, descriptions of customers. ''Kurdan' is the Turkish word for 'toothpick,' but [in Lubunca] it also means 'a guy with little money,'' she says. 'We called the police 'paparon,'' she says, explaining that police are their biggest threat, detaining unregistered prostitutes for days if caught.

The threat remains very real for Turkish sex workers, often taking cues from the country's political and religious leaders who attack homosexuality or nontraditional gender identities. 'The homophobic and transphobic comments by state representatives and media is always chilling, because it highlights how society thinks and perpetuates more hate speech and more hate crimes,' Zeynep Bilginsoy, the founder of LGBTI News in Turkey, wrote in an e-mail.

Her website is dedicated to publishing and translating into English news related to the LGBT community in the country, including articles with titles such as 'Trans woman sex worker missing since September' and 'Death threats after gay wedding.' Under Turkish law, violence directed at people because of their sexuality or gender identity is not a hate crime, resulting in often lenient sentences. The threat of being beaten up for being visibly gay in Turkey is commonplace and is one more likely reason that Lubunca has evolved into a slang used by some gay people who are not trans and are not sex workers.

Among some gay Turks, Lubunca is used not to dodge the police but as a way to exhibit one's identity. That is how Bilginsoy has heard it most. 'I experience it around gay men mostly and, sometimes, activist women ' as [a way] to show that one knows the lingo,' she says. It is like a declaration that one is part of the LGBT community to others who are in it too.

Lubunca is also often used as a form of entertainment through wordplay, known as gullum ' another Lubunca term ' Turgay Bayındır says. He says he never got really good at using Lubunca or gullum. 'A lot of gullum is also very cruel, but it's in a very joking way, because it's mostly based on insulting each other or making fun of each other,' he says.

When he first learned about the slang, he had just come out as gay. He was in college and knew nothing about gay life. 'When I figured out what [Lubunca] meant, I also didn't like being associated with that culture because, to me, that was a lower-class culture,' he remembers.

There is common discrimination against trans and gay sex workers, even within the LGBT community. He doesn't feel that way now that he understands Lubunca's functionality for those who need to use it, but he still doesn't use it as much as some of his gay peers. 'It's a subculture. When you use it, you are actually emphasizing that you belong to this subculture and you are also stressing your difference from the mainstream culture,' Bayındır says.

He is a 5 foot 6 young professional with salt-and-pepper hair living in one of Istanbul's central bourgeois neighborhoods. He works a white collar job, like most of the Turkish middle class. Beyond a select few words that come up in his volunteer work as an activist at LambdaIstanbul, a gay rights organization, he says he does not need Lubunca. He finds its origins fascinating, though

'A lot of words come from Romani,' the language spoken by Gypsies, or Roma, who often live in neighborhoods with other marginalized communities such as LGBT people. 'And some words come from other minority languages,' Bayındır says. 'For example, I think the word 'putka' comes from Bulgarian' and means 'vagina.'

'Paparon' is most likely derived from Romani slang or a Greek variation of it. 'There are a couple of bits of linguistic evidence that at least attest to a portion of the Gypsy part of the Lubunca lexicon that comes from a group that spoke a sort of Greek para-Romani,' Kontovas says, referring to a sort of Greek dialect spoken by Gypsies that is mixed with Romani words. ''Paparon' is the word used for 'cigarettes' and also the word for 'cops' ' presumably because they smoked a lot of cigarettes.'

But Lubunca is not often heard around Ulker Street anymore. The neighborhood gentrified, and the sex workers had to leave. Property prices have soared and attracted families and mainstream professionals. That has pleased some. One 30-year resident of Ulker Street preferred to remain nameless as she listed her complaints about the old days. 'You had boys and transvestites catcalling from the windows, and we have kids and families living on this street. It was awful,' she says as she takes a break from chatting with a neighbor. 'It is much better now.'

But attitudes toward transsexuals in Turkey is not. For trans women, it is almost impossible to find a job that is not sex work. These days, with increased reports of murders and other violence targeting trans women, the industry is in decline.

Kılıç left sex work a long time ago. After her gender reassignment surgery, she decided she wanted out. 'I didn't want to share my body anymore,' she explains. It had nothing to do with morality or shame, she insists, but with wanting to do more for her community.

Twenty years after joining the brothel at Ulker Street, she is now a well-known activist and has worked with human rights organizations on issues related to LGBT rights, sex work and HIV/AIDS. One of the major changes for which Kılıç, Bilginsoy, Bayındır and their peers are lobbying is to modify Turkey's hate crime laws so that they include sexual orientation and gender. Perhaps if they succeed, Lubunca could be one step closer to being used for fun rather than out of necessity.

In the meantime, the people who need Lubunca most, like trans and gay prostitutes, have to evolve with the language. As it becomes more popularly used by the LGBT community and members of the mainstream media, unregistered sex workers find themselves at risk of being understood. '[Lubunca] is trendy right now,' Kılıç says, 'I can't say anything. It's inevitable, since we live in that kind of world.' So they invent new words, words that even she no longer understands.