Demhat Aksoy: Resisting Against the State of Emergency with Love 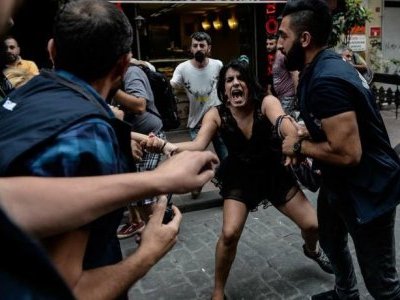 It was when I understood what it meant to “turn” that I actually began to believe this struggle needs to be waged. “Turning” is not merely passing from one place to another. I am talking about turning in the complete sense. About applying it to every bit and piece. Whenever I say the word or utter it somewhere, some people think it is an intersexual turn. This way of thinking is one that belongs to the heteronormative system imposed on us. I am actually talking about a turn against this way of thinking: namely, about being surrounded by norms while growing up and yet standing against them—to be exact.

In this sense, I can say the trans movement has transformed me, it has turned me. Indeed it seems to me that the movement has the capacity to turn not only me but all others. To be frank, the fact that it is so comprehensive is exciting. My most recent years came into being with this excitement which still exists. I have always been drawn to everything and everywhere as long as there is excitement involved. And by the way there is this thing they term “state of emergency”. It is a kind of thing that aims to kill our excitement, lock us in our houses, standardize all, and say “you don’t exist” to us. A game it is. But one needs to know that every game has an end. And the end of such a terrible game is eventually terrible for them, isn’t it' Don’t you think we, who resist with love, could win against evil once again with love' Just look at those who have waged a struggle of love in history and check the results – it has always been love that wins. The attitude of the LGBTI+ movement against those who want to kill our love has always been the same: resist! But our resistance is not that of norms but that which is resistance par excellence. With love, that is.

Speaking about the word FORBIDDEN most recently: I am calling it a word because for me “forbidden” is nothing more than a word. “Femininity is forbidden,” said my family and I ran away, turning back to my own self. “Running in the classroom is forbidden,” said my teacher and I organized all the kids and then ran. “Women are forbidden to laugh and to go out on the street with miniskirts,” said some and I laughed even more, hanging out on the streets day and night with my miniskirts. And now those who think they are “masters” say “LGBTI+ activities are forbidden”. One first needs to remind them the banner held during Gezi events: “What ‘forbidden’ ayol!” I said we are “turned” ayol. And we think we won’t be able to turn these people'! See what I have turned the manhood and the power burdened on me into.

I don’t give a damn to any of these. There are surely those who revolt where there is violence and oppression. Wasn’t the family such a place' I have been beaten hard so many times by my elder brother just because I was walking with a twist. And what did I do' I built my own life and I’m living – living with the identity and the body I like. A spirit covered with struggle never gives up. Giving up is not “in our nature"! They shall be frightened, for the turned and fags are coming with love.